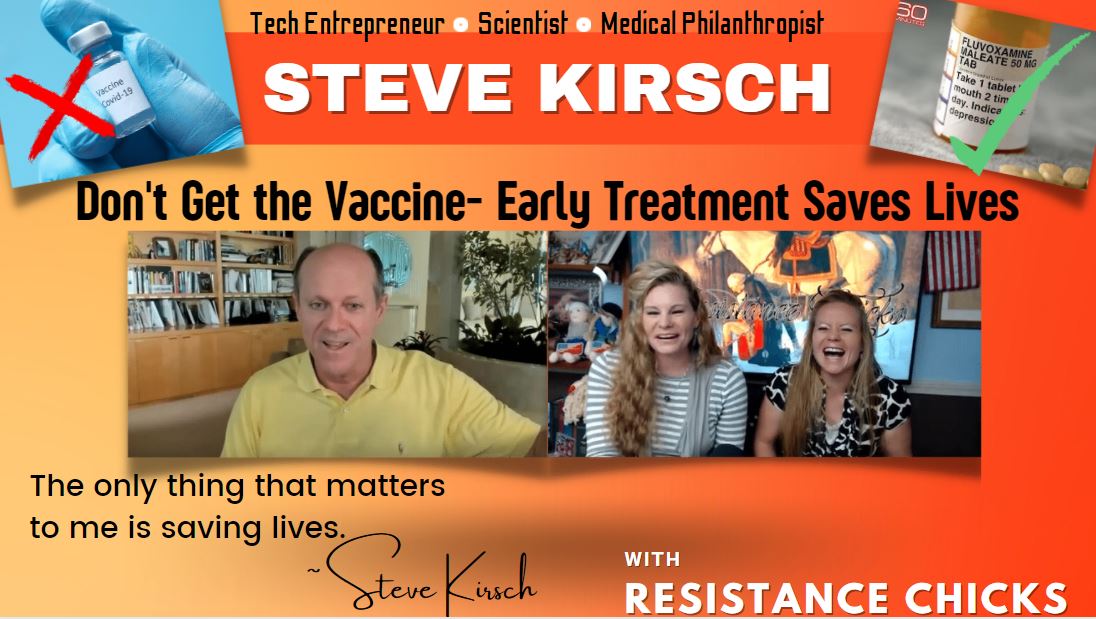 Steve Kirsch, current director of the Covid 19 Early Treatment Fund is an MIT alumni who has made a career as a tech entrepreneur. He’s founded 7 companies, two with billion dollar valuations. He’s a husband and father of 3 daughters- who, by the way, have all been double vaccinated. So how did a brilliant, self-made, successful businessman, go from brushing shoulders with the greatest minds in the world, to one of America’s top censored names? From being loved and lauded by countless in his many fields, to a major thorn in the side of the FDA and CDC as they push vaccines and mandates on every living creature?

Steve has a big heart, after his diagnosis with a rare blood cancer, he set up a charitable foundation to fund research of the disease that plagued him. In the early days of the pandemic, he was at the forefront, pushing hard for early treatment. He was encouraged by Dr. Zelenko’s successes and later heard about Dr. George Fareed and Dr. Brian Tyson and began promoting their protocol which included the controversial Hydroxychloroquine along with a new up and coming repurposed drug called Ivermectin. We all have affectionately come to call this wonder drug “horse paste,” thanks to the FDA’s tweet maligning this life saving drug.

Steve founded the Covid 19 Early Treatment Fund, and put in a million dollars himself to fund research and trials. His goal is to find an existing drug or drug combination that, when given early, reduces hospitalization and fatality rates by 75% or more.

His foundation has already put forth over 4 million dollars towards researching promising repurposed drugs with more to come, including the very effective Fluvoxamine. Fluvoxamine is an anti depressant. “SSRIs appear to activate a central nervous system protein that plays a role in regulating inflammatory responses. Small clinical and observational studies show that repurposing fluvoxamine to treat coronavirus prevents some of the most serious complications related to inflammation, and keeps people from hospitalization.” Doctors around the world have been using fluvoxamine with great success.

Steve calls himself a “medical philanthropist” who says:

“the most important thing to me is saving lives.”

In May of 2021 most of the world saw him as an eccentric go-getter, who just wanted to help people. Then a series of events would soon turn his world upside down. Steve and his whole family: himself, his wife and three daughters, were all double vaxxed in March of 2021. Steve will tell anyone right upfront, his family is not anti vaccine, quite the contrary. He praised the vaccines as a modern wonder of medicine. Then one day he received a message. “Steve, do you believe the vaccines are safe?“… “Of course!” he responded, not knowing where this conversation was going. “How do you know they are safe?“– the person continued pushing Steve. “Because the FDA says so!” he replied. Then came his first antidotal evidence that made him question, if even just a little, his firm belief that the vaccines were both safe and effective. “Three members of my family died within 1 week of the vaccine.” Steve didn’t know how to take this information and didn’t have a way to corroborate the “evidence”, so he packed this disturbing conversation away. That conversation came crashing back in his face when his carpet cleaner Tim, a man Steve knew personally, came to his house with a mask on. “Hey, Tim, why don’t you just get the vaccine and you won’t have to suffer wearing that mask,” Steve joked. The response he received was not what he expected. “I got the fist vaccine but can’t get the second, I had a heart attack two minutes after I got the vaccine.” “Did you say two minutes before or after the vaccine?” Steve asked “Two minutes after,” was the reply as the man who came to clean the carpets opened up his phone and showed him a video of his wife with a shaky arm, like Parkinson’s- the arm she received the vaccine in.

This rocked Steve’s world. “What he just said is impossible!” and he realized that what he had been told by the FDA was wrong, the vaccines were not safe. Steve then became laser focused on whether the FDA and CDC were actually telling us the truth. He began pouring over the CDC’s Vaccine Adverse Events site, aka VAERS and combing through the data.

Deaths peaked at one day after receiving the vaccine.

He found that VAERS was drastically under reporting. He was shocked after speaking with a physician who had 2,000 patients come to her with neurological problems after they were vaccinated. How many did she admit to reporting to VAERS? Two. That is an under reporting factor of 1,000. Steve has had a team of statisticians and mathematicians pour over the data and they have found at least 150,000 deaths from the vaccine. In September, Steve made waves with his slide presentation to the FDA showing that the vaccine takes more lives then it saves.

Here is a link to his entire PDF presentation https://www.skirsch.com/covid/VRBPAC-10-26-21.pdf

Steve says the vaccine weakens your immune system and that even in older age groups, two 80 yrs olds are killed for every one that is saved. The numbers are even worse when it comes to vaccinating children. Kill 100 to save 1 and that isn’t including the injuries, many that are life-altering, like 12 yr old Maddie DeGaray who is now in a wheelchair as a result of participating in a vaccine trial in January of 2021.

When asked about the small number of participants in the vaccine trails, he responds,

The FDA, CDC, and vaccine manufacturers are burying the adverse events. They called Maddie’s life-altering injuries an abdominal complication. Is it okay to kill 100,000 to save 600,000? Steve says,

“The vaccine is the worst way to save lives! Early treatment is best”

Steve has an entire website dedicated to saving lives the right way.
Early and correct dose is key and you can find all the latest protocols on his website https://www.skirsch.io/ This is probably the best website out there to help you with early treatment, long haulers, and vaccine injuries.

There is hope and Steve Kirsch is here to bring it. I believe we touched a bit on everything that surrounds the Covid madness our world is experiencing right now. From mandates and what is driving those in the medical field to ignore early treatment successes, to what is keeping the main stream narrative focused on the vaccine booster to infinity, plot.

Steve has been maligned, lost friends, had all 14 members of his early treatment scientific board resign, vowing never to speak to him again, had his Medium account with 10 years of articles obliterated, and main stream media attacks hit him from all sides. Why? All because he dove into the vaccine safety data and when he emerged from swimming with the numbers, he knew he had to warn everyone to get out of the water- sharks were everywhere. After all of this I had to ask him “Steve, does all of this pressure get to you or does it fuel you to keep on telling the truth?” He answered with a story and began to tear up while telling it. A woman wrote to him, telling how she had played his vaccine presentation to her local school board when they had opened up the floor to comments over implementing a vaccine mandate. After they watched his presentation, they ruled 3-1 to NOT implement the mandate. This is what keeps Steve going. He, and many like him, are making a difference. They are like our founding fathers; they too put their lives, their fortunes, and their sacred honor on the line to stand against tyranny. Steve can’t know how many lives he’s touched, how many he has saved, and how many he has helped. One day he will know. Until that day, please keep fighting for the truth, Steve, the world needs you. You were born for such a time as this.

Steve has a million dollar challenge for those of you who are interested.

Part of me thinks that if a big MSM source was to actually break ranks and join the resistance (truth tellers) they could manage to reach a ton of these blue-pilled people and make a large shift in the ratio of our society. If they posted a documentary exposing this with a concise break down of the history of what has occurred already and what we know, or have strong reason to believe to be true, a significant dent could be made before the backlash began. It would be like the first of Mike Lindell’s documentaries converting or awakening millions prompting them to do their own research.

Once we get them to look beyond the MSM and SM they look at now it all changes for them. The “red-pill” moment happens and from then on they can discern for themselves. I believe a source like that could weather the storm and become the Joe Rogan of the big networks. Sure they will be portrayed as Alex Jones is, but with enough audience sharing what they saw and heard all over SM THAT will garner the attention of the rest, just like Rogan’s show does with episodes like the Gupta one. The MSM is forced to address it. Same can happen here but on a regular and massive basis. I’m thinking Project Veritas but with an audience the size of Fox News or NBC. Imagine if Mike Adams had his HRR blasted 24/7/365 on a huge portion of TVs and phones/devices all over even just the US alone. The censorship on the basis of “misinformation” would be decimated. We are chipping away here and there but I can tell you that where I live things have actually backslid. People here are even more prone to wear masks and think more obediently then they did 6 months ago. I have no idea why but they certainly don’t seem to be less trusting of govt. or other “authorities” on this.