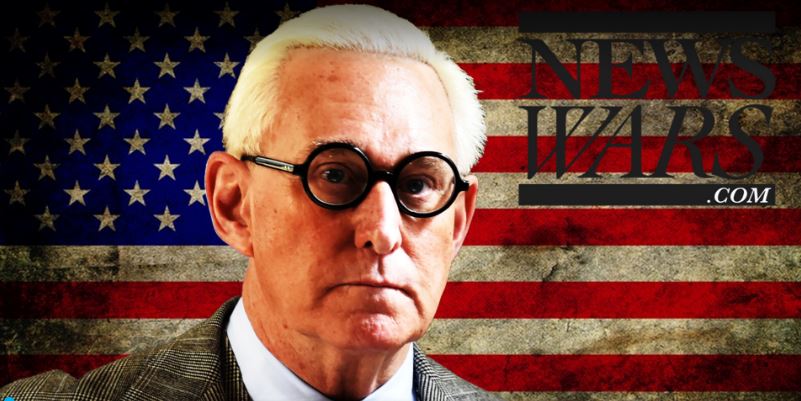 “FBI, OPEN THE DOOR!” Those are the words that Roger Stone was greeted with Friday morning, just around 6:00 am EST, January 25th, 2019. The FBI served an arrest warrant along with a search warrant for his home. In Stone’s own words they, “terrorized his wife and his dogs.” Roger Stone has been released on a $250,000 bond and says his attorneys estimate his legal fees will reach upwards of $2,000,000. “I will not be pleading guilty,” Stone said in his exclusive interview with Alex Jones on Infowars, “and I will not be pressured into baring false witness against the president…. As long as I have a breath left in me and a dollar to my name, I will fight this.” Paul Joseph Watson reported…
During a prescient text message exchange with Alex Jones last night, Stone also expressed his fear that, in his own words, they were “setting me up for the kill!” In a subsequent phone call, Stone said that he expected his arrest was imminent.

Conveniently, CNN was on scene an hour before the FBI raid, stating they weren’t tipped off by the FBI, but just had a “gut feeling” this was a place they needed to be. A bigger load of crock was never attempted to be peddled. If you believe that line, listen for the crazy wagon sirens, you need to be taken away. Talk about a “smirk”… I took a screen shot of the smirk on the CNN reporter’s face when he was asked what Stone’s reaction was upon opening the door: the reporter was as giddy as a school boy, like the cat that ate the canary. Someone sit this kid down with me to play poker, I have a feeling I’d win.

But who is Roger Stone anyway and why is this such a big deal? I had two friends on my Facebook page respond with “who is that guy?”. Stone has been a personal friend and adviser to Donald Trump for over 40 years. But if that was his only crime (and you can rest assured that in and of itself IS a crime as far as the MSM and FBI are concerned), it would be one thing… but that isn’t the crime they want to hang him for. They are accusing Stone of lying during the post-election Russian investigation (which has come up empty, with zero proof of Russian collusion); it’s a hallow accusation, but it’s what they are running with because they can’t just come out and arrest him for his “real crimes.”

But lets not forget the biggest crime of all, Stone’s association with Alex Jones and Infowars. Regardless of what you think of Alex Jones, he and Infowars.com are the reason Trump won in 2016. They are on the front lines, and if they weren’t undercutting the enemy at every turn, the media and powers-that-be wouldn’t be so bloodthirsty to take them down.

Let’s face it, these people are scared. Donald Trump was never supposed to become president, they had rigged the election; they tabled the investigation into Hillary’s e-mail scandal so it would be swept under the rug, because they had their big plans and they needed Clinton in order to implement them. Their big plans? War with Russia, taking out Assad, pushing the LGBT agenda, legalizing pedophilia, insuring abortion rights are upheld and furthered (as we saw in New York on Tuesday) in the Supreme Court with their lifetime picks for Justices and so many more. All of that came to a screeching halt, November 8th, 2016 and they’ve been trying to sabotage Trump’s presidency ever since.

We are in a war… but climate change isn’t it; we are in a war for the rights of all human beings, the preborn, the youth, the elderly and everyone in between. We are at war to defend the freedoms that our forefathers fought and died for.

This war is very, very real. But for the average American, they don’t feel it, they don’t notice it and they don’t understand the casualties. Why? Because the battle field is in the virtual realm, it takes place: On The Web. For years, Hollywood has been telling us what the deep state and globalists are doing; they put it in all of the movies we greedily eat up, which serves two purposes:

A) To desensitize us to it’s happening, so when we actually do notice it, we don’t think it’s a big deal.

B) To put it in the realm of fiction so we think it’s pure fantasy that it could actually be happening when it appears right before our eyes.

The most well known and easily identifiable film this is seen in, is the Matrix. It takes place in both the real and virtual world. If you die in the Matrix, you die in real life. Another virtual/reality film recently released is Ready Player One where the stage takes place largely in virtual reality, with human’s taking on virtual avatars. Those avatars live entire lives and interact with other people, solely on the web.

Today, thanks to the internet and media, battles are fought everyday for our minds. The soldiers on both sides use the court of public opinion on Social Media to gauge a victory.

So what happens, in this war, when the other side holds all of the weapons to “un-person” you, to take you out of the game, out of the battle? They’ve done so to Mila Yianoppolis, Alex Jones, Laura Loomer, Tommy Robinson and countless more. At first they just harass you, like they’ve done with us on Resistance Chicks and our YouTube Channels. They censor you, hide you in a back room, demonetize you, and make it so no one can find your content; they time-out your channel or pull your live-streaming ability… and then, when that isn’t enough to keep you down, when you refuse to bow to their encouragement to self-censor, then they ban you from Facebook, or Twitter. And if that weren’t enough, they come after your Patreon accounts, or shut down your PayPal account like Alex Jones. But then, after all that, if you still don’t bow down to worship their gods, they pull off the gloves and come after you, in the real world. They print lies about you in the news paper, they file lawsuits against you, like they’ve done to Alex Jones, they threaten you and then they arrest you, like Tommy Robinson and Roger Stone. However, when you REALLY expose them, with proof, they just flat out kill you and cover it up like Seth Rich, Justice Scalia or the countless doctors who have exposed the vaccine industry for killing and harming children.

So are we at war Alexandria Ocasio Cortez? You’d better believe we are and we’re willing to put our reputations, livelihoods and very lives on the lines for the cause of truth and Justice. We will not rest until our rights are restored, until our Republic is safe and the most innocent in it, are protected from being brutally murdered in what should be the safest place on the planet: it’s mother’s womb.

We are with you Roger Stone. Donate to Roger’s Defense Fund here.