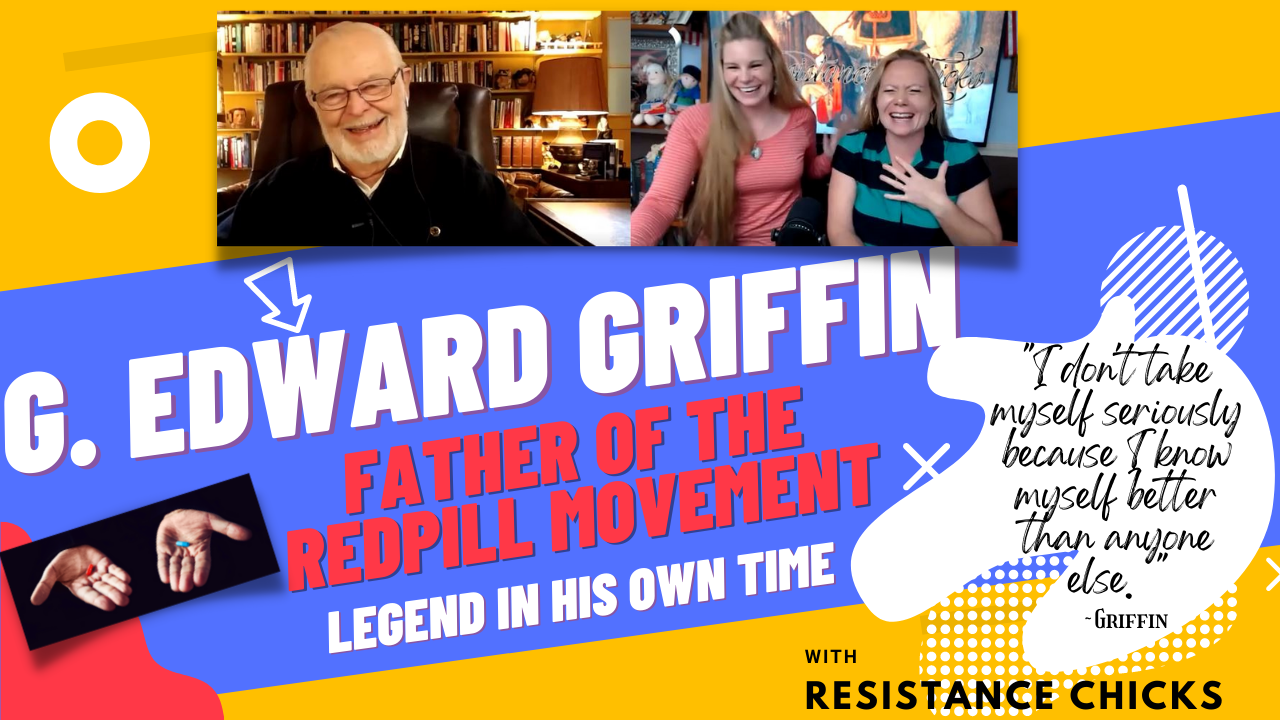 G. Edward Griffin. The man, the teacher, the legend- joined Michelle and I in an interview this week; an interview that has been on the top of our list for many years. Some of you may know him as the “hell-hound of the Federal Reserve” through his best selling book The Creature From Jekyll Island or the cascading amount of spell bounding documentaries that have been produced as a result of his work throughout the years. That’s certainly how we came to know and love the man I am officially crowning The Father of the Red Pill Movement.

While Mr. Griffin would go on to expose many conspiracies of our cabal overlords, it’s the creation of an entirely new and fiat monetary system by the same miscreates (who needed to be regulated in the first place) that was my first giant red pill. Where does money come from? Where does it go? Who makes it? G Edward Griffin unveiled to us the money magician’s secrets. He gave us the first close look at their mirrors and smoke machines, the pulleys, cogs, and wheels that create the grand illusion called money. They say once you take one red pill, then the others are very easily swallowed.

We asked Mr. Griffin what his first red pill moment was, what sent him on this wild journey of true, factual conspiracies and not just wild goose chases? He said that there wasn’t a huge defining moment, but that a large part was reading a book about the corruption in the United Nations. He, like many Americans, felt that with the creation of the UN, the world would finally be a place of peace, “our last hope”. Little did he know that it was filled with the most vile and corrupt people imaginable. Once disillusioned of the idea that great men would bring peace to the world, he began to look at the world through a much different lens. Almost as if to say “If those who we put our trust in will not make this world a better place, then it is up to the rest of us to do our part.” He no longer looked at prestige or a good comfortable life as goals to obtain, but exposing those in places of great power.

You are going to love this interview as much as we did.

An amazon review sums up the essence of Griffin’s book beautifully
“The title refers to the formation of the Federal Reserve System, which occurred at a secret meeting at Jekyll Island, Georgia in 1910. It was at this meeting, as Griffin relates, that the “Money Trust”, composed of the richest and most powerful bankers in the world, along with a U.S. Senator, wrote the proposal to launch the Federal Reserve System (which Griffin calls a banking cartel) to control the financial system so that the bankers will always come out on top. The biggest problem in modern banking, according to Griffin, is and has always been the creation of fiat money. Fiat money is money that is “declared” money by the government. It is not backed by anything but promises and deceit. All societies were sound financially when they used gold or silver to back their currency. When the bankers finally get their way and install fiat money, the result is inflation and boom and bust cycles. Griffin gives numerous examples of this, such as repeated failures by American colonies and European states in using fiat money. The purpose of fiat money is so that the government can spend more then they take in through taxes.”

“It was a SCAM! Having the banking cartel control monetary policy is like vaults that keep the good guys out,”

says Griffin. We gave up control of our monetary system to politicians and con artists. It’s all an illusion. The money created under the Federal Reserve doesn’t exist until we borrow it.

“America is truly a representative government, only it doesn’t represent the people but represents the Banks,”

he goes on to explain. “In this giant Illusion we lost America.”

Griffin explains inflation with a perfect analogy, the filling up of a rubber balloon. You can blow all the hot air in it you want and the balloon keeps getting bigger, but you don’t end up with any more rubber. Inflation is not inevitable but it is when you live under tyranny.

We asked Mr. Griffin to opine on the obvious manipulation in the sound money markets of gold and silver, especially in light of the Wall Street bets and other runs on silver in early 2021, which saw premiums skyrocket while their corresponding spot price barely budged. He explained the manipulation of the market and even took a rabbit trail down the diamond route and saying they actually are not rare but quantities are held back to increase profit. He said “zurcs are better anyway”.

We then asked Griffin to speculate as to what our future holds. He was reluctant but started with

“History is not written by the majority, but by the 1%- the doers and the shakers.”

He said he envisions things getting worse before they get better, and at almost 90 yrs old (he has looked the same youthful, spry self my entire life) he’s not sure he will see the other side, but he is content (like our founding fathers), to be putting down bricks, a foundation layer, for a better world to come. This was the most moving moment of our time with Mr. Griffin. I truly teared up. Herei s this man, almost 90 yrs old, still going strong, doing frequent interviews, writing extraordinary, deep-dive articles on his fantastic, curated news website NeedToKnow.News, pulling together top talent from across the globe for his Red Pill Conventions, and firing up the grassroots through his Red Pill University. When does he rest? Maybe that’s his secret. He lives on because he believes in something and has a purpose beyond himself. This is what he wishes for everyone and I whole heartedly agree.

So where are we headed? A world where the balloon will go from being sold as “more rubber”, to no balloon at all- instead it will be imaginary. He said if he puts himself in the position of his opponents he would unleash another crisis; perhaps an invasion of manufactured aliens or an EMP, but we certainly haven’t see the end of their plan for domination.

Griffin gave an eye opening example to how you can get otherwise normal, rational people to give up their liberties. A drowning man is not interested in the 10 amendments, but is only thinking: ‘I’ve got to live.” If you can keep people in the illusion of drowning, they will give up every freedom they have.

Will the “flywheel of this great state we have,” the one our founding fathers put in to motion, keep us going? Even though Griffin’s short term outlook seems a bit bleak, so bleak he thinks he may not see the light break forth in his life time (Michelle and I have put in a word with the Good Man upstairs to make sure Mr. Griffin tastes the fruit of the great sacrifices here on earth and in the world to come, he’s got a lot of great years left!) he does have some encouraging words:

“We have the numbers and the time to rebuild is now.”

His Red Pill University is “the engine to put into action the change” we not only want to see, but need to see and teaches people how to bring the “tin horn politicians in line,” what an average citizen can do!

As we finished up our hour long discussion that went by way too quickly, I asked Griffin if he ever sits back and takes in the fact that millions of people’s lives have been changed and eyes open all because he decided to take the path of truth over comfort. He said it does make him smile that there are people in this fight because he was true to his call and he enjoys seeing younger generations not just understanding the facts and historical truths he’s laid out but have been so moved by what Griffin uncovered that they are making a difference. He says “it makes me giddy.

He says his fame doesn’t go to his head, “I don’t take myself too seriously because I know myself better than anyone else.” Wise words indeed.

He leaves us with this:

“Go out and watch the stars.”

Indeed Mr. Griffin. Indeed we will.

Join us tonight at 7:00 PM ET for a LIVE premier of our interview on the following platforms:

OR watch the interview now on the following

Also, below is a G. Edward Griffin inspired skit Leah and I did a few years ago explaining the absurdity of printing endless dollars…

Well now I’m hooked on Mr. Griffin as well. I did first see him on that old and brilliant documentary about the communist textbook approach to domination, from 1969 if memory serves correctly. I don’t know how I was unaware of all his work he has done between then and now though. I won’t be at the conference but will certainly watch it from the comfort of my own home, as Mr. Griffin put it.