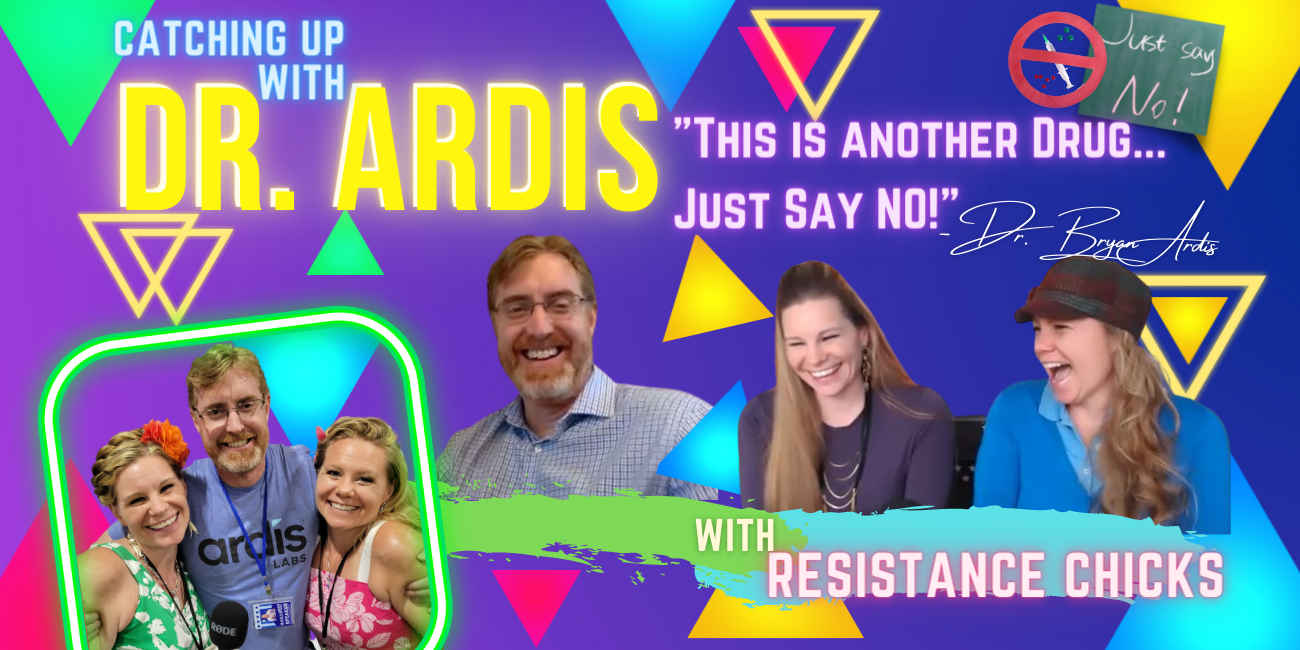 Catching up with Dr. Ardis!

“I’m not okay with them stripping these liberties away to inflict harm, disease and DEATH!”

Every once in a while we meet people in life who have no hidden agenda, who are real everyday American heroes, who don’t care if anyone knows their name, but they have a drive in them that says, “I have to help people.” When we met Dr. Bryan Ardis and his beautiful wife Jayne in Tampa, FL this past year- it was clear we had met one of those people- now, less than a year later, we are proud to call Dr. Ardis and Mrs. Dr. Ardis our friends and compatriots in this fight.

There is a reason why his popularity has spread like wildfire and that’s because he brings ANSWERS and HOPE- all within the beauty of God’s creation- be that our bodies- or the gifts He’s given us to heal ourselves right from the earth. He doesn’t pull any punches- as he says, he got into this fight “for vengeance” because big pharma killed his father-in-law and kicked him out the room while they did it. Bryan Ardis has a score to settle, but he’s not going about it with guns or grenades, he’s doing it by exposing these monsters for the murderers they are, and by saving the very lives they are trying to kill. He’s doing it by empowering people with the real keys to health that don’t come in a prescription bottle, but can be found in supplements and the food we eat.

We had an incredible conversation with Dr. Ardis yesterday where we talked about what he’s been up to since Bardsfest, how he and his message have skyrocketed, of his speaking to grassroots patriots all across this country, along with legislators- giving them the truth that has been hidden from them. He gave us several amazing stories that will make you laugh and be excited about where our movement is headed. He also told us about his new line of supplements you can purchase on his website: TheDrArdisShow.com along with several other things he’s doing to help fund the legal fight of those on the front lines such as Dr. Peter McCullough and Ryan Cole. He tells us, “I really can’t stand to make money off of Covid,” so he’s taking the “talents” God has given him to insure others can carry on in their fight. He says:

“They should have the right to practice medicine.”

…and he’s going to see to it that they are able to continue to do so. He decided just shortly before coming on our show, that in order to fund Ryan Cole’s fight, he is going to be producing a t-shirt that in place of the covid “treatment” killer drug Remdesivir, it will say (as many doctors have said) ” RunDeathIsNear”.

He’s also fighting for your rights. When it comes to taking the vaccine, Dr. Ardis tells it like it is, as Nancy Reagan coined in the 90’s he says:

“[The vaccine] is just another DRUG- JUST SAY NO!”

Join us LIVE- we will be premiering our interview with Dr. Ardis Thursday, January 13th, 2022 at 8:00 PM ET on the platforms below!

Check out our previous Interviews with Dr. Ardis Below: