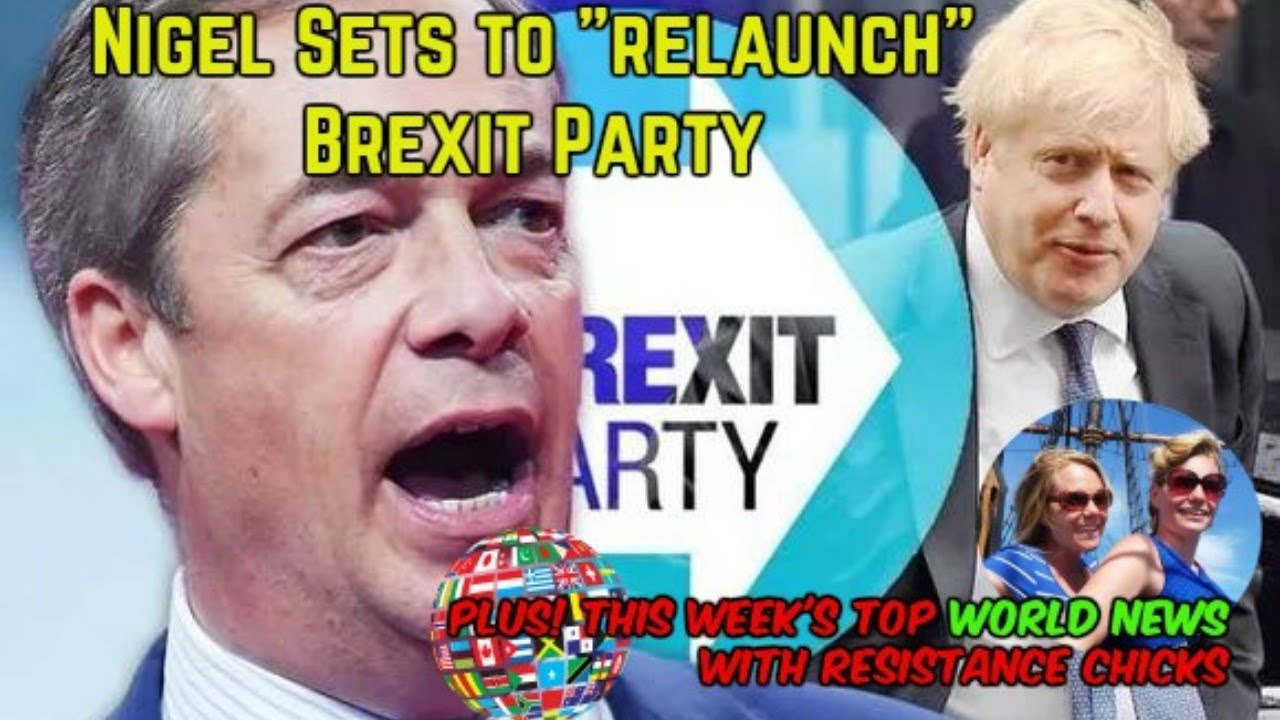 NIGEL Farage has confirmed that he is preparing to relaunch the Brexit Party amid concerns that Boris Johnson and the Conservatives are losing control of the country and could go soft on Brexit… Read More: https://www.express.co.uk/news/politi… LIVE every Friday at 6:00 PM EST for our Weekly News Round-up and every Sunday 1:00 PM EST for World News Masfaith3. Resistance Chicks: Leah and Michelle Svensson report with a Founding Fathers “Christian”, commentary on the latest events in the United States and around the world. American Patriotism Is the furtherance of the Gospel of Jesus Christ First Ohio is our country. For over 100 years “Enslaved laborers,” the Masses, by Rothschild’s, Rockefeller’s, Morgan, so many more warlords, who have been playing a game with America’s “psych”souls. Using a made up enforcement Army or Branch of their criminal organization called The Federal Reserve, IRS. Made up by hired thugs, all gangsters, criminals. etc. With counterfeit money printed on an illegal printing press. My Country is under the Constitution which limits financial transactions to just 99% gold and silver coins. We do not agree with the Left Right paradigm even though in order to communicate we need to use a vocabulary people can understand. We opened with our Beliefs. The Bible, God the Holy Spirit. Which is legal. The Declaration and the Constitution of my country comes from a deep understanding of Jesus Christ Mission on earth. Ohio other States or countries formed a union called the USA. All were established by deeply committed Christian men to the furtherance of the Gospel of Jesus Christ: Life, Liberty, The Pursuit of happiness, The Bill of rights, Men created Equal. The whole thing is Christian. That is True Patriotism Everything Our country is and stance for is for the Glory of God and the furtherance of his Gospel. par·a·digm /ˈperəˌdīm/ Philosophy, Language, noun 1. a typical example or pattern of something; a model. “there is a new paradigm for public art in this country” Similar: model, pattern, example, standard, prototype, archetype, ideal, gauge, criterion paragon, exemplar 2. LINGUISTICS a set of linguistic items that form mutually exclusive choices in particular syntactic roles. Notes: name Resistance Chicks = “Resistance to tyranny is obedience to God!” , Founding Fathers Christianity is obedience to the Word of God in government and owning land which means 95% of men should farm to provide for themselves and their families. Independence means dependence on God alone, not government or any other. Leah and Michelle own and run a homestead, God’s Little Acre, in SW Ohio where they raise and breed heritage hogs and chickens, keep bees, have fruit and nut trees, a variety of berries, grow their own vegetables and are proficient in permaculture and sustainable homesteading. We teach others how to can, make bread from scratch, grind wheat, butcher hogs and process chickens. Our motto is that God put Adam in a garden, so that must be where man is meant to be happiest. Contact Us: Resistance Chicks P.O. Box 107 Milford, OH 45150 E-mail: [email protected] www.resistancechicks.com Facebook: https://www.facebook.com/ResistanceCh… Twitter: @ResistanceChics https://resistancechicks.blogspot.com Blog Isaiah58Minitries https://isaiah58ministries.blogspot.com/ Bitchute https://www.bitchute.com/channel/NEBF… Minds https://www.minds.com/ResistanceChicks Brighteon Resistance Chicks https://www.brighteon.com/channel/res… Drop.Space Resistance Chicks https://drop.space/@ResistanceChicks Masfaith3 on Sound Cloud download or listen to original songs https://soundcloud.com/leah-svensson JoshWhoTV Resistance Chicks https://www.joshwhotv.com/channel/5de… New Site WG1WGA Masfaith3 https://wg1wga.com/