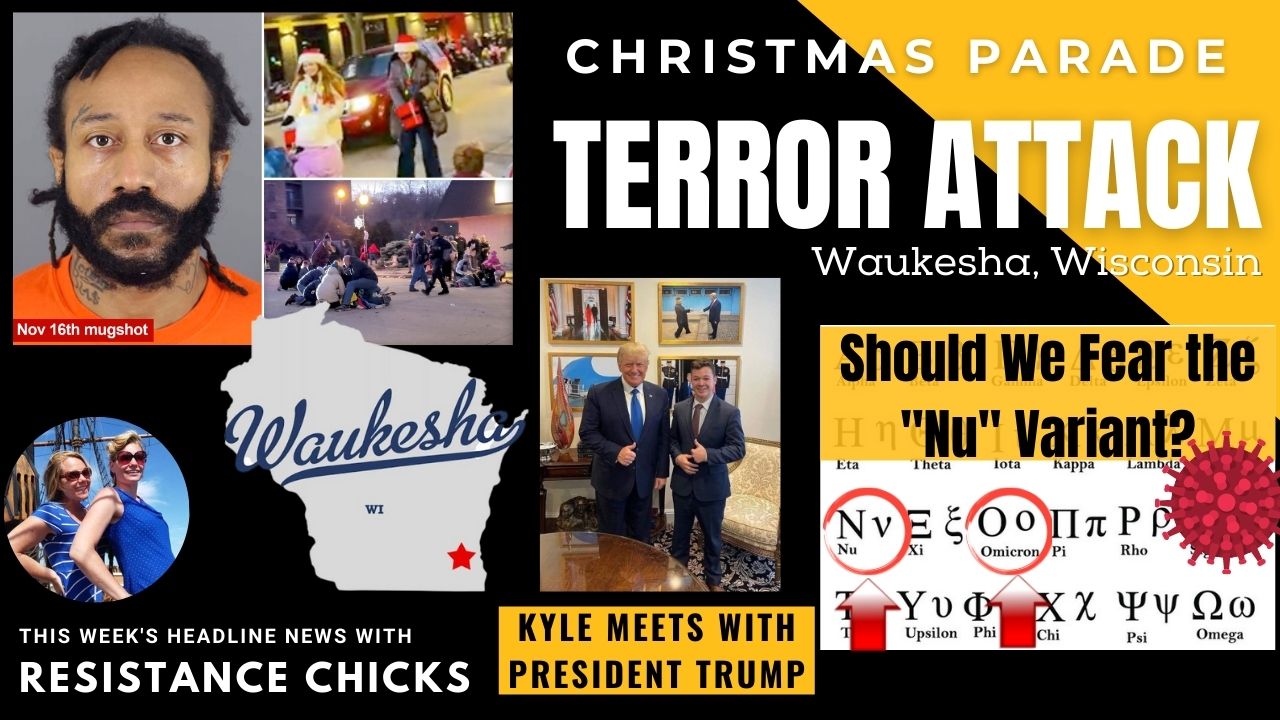 This week Kyle Rittenhouse met with Donald Trump as free man. Then, more fear-mongering with the latest Covid Variant, Nu, which has more mutations, but is it more dangerous? Also, the media is covering up a racially motivated, domestic terror attack by a black, BLM racist activist, who plowed through a crowd of people in a vehicle at a Christmas parade in Waukesha, Wisconsin. The fake news media are calling it a “car accident”. Also, Hunter Biden’s ties to China run deep and are still active- we’ll tell you more coming up tonight!

Join us for our live program on Brighteon.TV at 6:00PM, then pop over to our regular platforms below at 7:00PM where we will be talking about more top news from this week!

Shop the BrighteonStore.com TODAY and Use PROMO CODE “CHICKS” to save 5%!

There are still a LOT of people that are still completely unaware of any actual truth regarding the virus, variants, and vaxes. In fact from where I live it appears these people make up the overwhelming majority. Many people are very unplugged from news outside of the weather, sports, and whatever bits and pieces of political propaganda they may overhear by mistake while they carry out their daily activities. In many cases this isn’t too harmful because they are usually aware that they are out of the loop and so they don’t pretend to know what is going on. In the case of covid/peripheral subjects however they are concerned and when ANY source tells them something related they believe it,,, unless of course it is coming from a source somehow related to someone they don’t like or has been accused of being fake news by the actual fake news.

It’s also not hard to understand why they believe what they believe when you consider how insane things truly are. The normalcy bias causes people that are not red-pilled to think things like “Well why would they do that?” or “Well it’s just common sense that if your vaccinated then you are obviously safer than if you’re not”. Just a couple years ago nearly everyone of us would have thought the same things as them. I can easily understand why people think what they think and actually believe the left’s lies when that is all they are receiving in the mainstream anything, anywhere. I used to get a lot more angry at people that I thought I was at war with because I couldn’t see how they could be on the other side of the issue knowing what [we] know. The mistake was that it was never what “WE” knew on any of these controversial topics, most of which shouldn’t even be controversial and didn’t ever used to be. As I remind myself that these people are the recipients of an onslaught of propaganda that itself has trained them to reject the “misinformation” being spread by those radical right wing “Trumpers”, like me, I am able to understand WHY and HOW they can be of the mindset they are.

This all comes back around, as it always does, to the media being the greatest enemy of the people. Yes, of course, the deep state is behind everything but they aren’t able to accomplish any of this without their indoctrination and psyops arm the media'. I know the govt. schools are the indoctrination branch of the DS but that's just the first phase. After they graduate from all that the MSM takes over. This is why the 1A is the FIRST amendment. Without the active censorship of the alt-media or rather alt-info (real news), or even just open discussion, their obviously drastically flawed false narratives are no longer at all acceptable to any reasonable person as even plausible, let alone likely. I know I'm preaching to the choir but I do so tonight because I want to point out that these people that are still drinking the Kool Aid are still not observing any other sources of info than those they were a year ago.

Now here's where I do have some reason to expect more from these people, even the most blissfully ignorant of them all. One thing they surely must be aware of is the fact that their media people of choice do mention the existence of "misinformation" and even their govt. is talking about that on their TV screens and such all the time. No matter what they are hearing about that or choose to believe they are at least aware that there are other people saying other things and that this fight is going on and with many being serious enough about their position that they are willing to lose their job, relationships, even custody of their kids in some extreme cases. This SHOULD be causing reasonable people to question "WHY are they so vigilant in their position?". These people should be lead to ponder just what it is these others are seeing and hearing to cause them to see all this so differently. Certainly they can't blame this on Trump as he continues to defend and promote the vaxes. This flies in the face of their favorite default of "orange man bad" as the root cause of all of societies ills. So THIS is why I can not just let them off the hook altogether. On some level they must realize that there must be something to the other sides argument. I do have a friend that was looking into the "flat Earther" theory. He was curious as to why anyone would even consider it a possibility. I must admit that I too am baffled as to how this even came about. I'm just not as curious as he nor have the time to justify applying towards this topic. IOW, I have better things to do, haha. In the case of this matter of vaxes and masks however this is not that. Anyone should be able to see that the idea of a rushed to market vax, I mean they even called itOperation Warp Speed’, is something that could be a problem and should maybe be more closely scrutinized than say the flu shots of the past, though I don’t trust those anymore either after this. It should be easy for people to understand why people are reluctant. It should also be clear that we are overreacting to this by a long shot relative to our response to other viruses/diseases/etc. in the past. It is simply not a proportionate response, given even the worst of their bogus numbers and the large portion of the population demographics not even vulnerable to the original virus/bioweapon. So, everyone does have good reason to at least hear the other guy’s story.

On top of that, it used to be that when Americans (free people) were being directed away from information or told not to listen to that guy over there, they became more curious as to “Why not? What could it hurt? What’s to worry about?” I thought it was just human nature but apparently I took that for granted. Nowadays most Americans are more than willing to just accept whatever that nice lady on TV told them or even that politician that they know has a terrible rep for lying about everything else. The only explanation I have for this is the success of their decades long indoctrination program known as “the education system”. Well couple that with a soft and too easy culture that says it’s not only okay to be lazy but even encouraged and you get sheep that want a comfy stall/cell, rather than a plot of land they own and control over their own future (freedom).

If you took the time to read all this, thank you and I’m sorry. 🙂