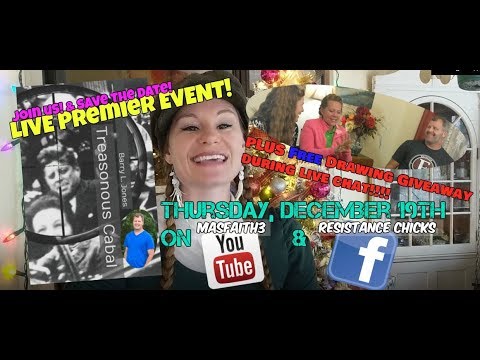 Save the Date! JOIN US Thursday, December 19th 8:00 PM EST For our LIVE Premier EVENT of The Treasonous Cabal With Historian & Author: Barry L. Jones Join the LIVE chat to Enter our drawing for Barry’s book!!! Winner will be drawn in Live broadcast immediately following!!! Live on our YouTube Channel Masfaith3 CLICK HERE Live on Facebook: https://www.facebook.com/ResistanceChicks/

An eye opening interview on renegade government authorities, organized crime, the PLOT to take down JFK… and their attempt to do it again. With JFK author and historian Barry Jones.

“As assassinations go, the JFK assassination was unique for at LEAST a few reasons. First, the very nature of the crime was astonishingly brutal…and visible. Second, in the aftermath of the “Crime of the Century”, scores of assassination witnesses died violent…and unexplained deaths. And third, the subsequent investigations created many more questions than answers. This book is an attempt to answer three of those questions. Why was President Kennedy killed? Who benefited? And who had the power to cover it up?”

Link to purchase the Treasonous Cabal on Amazon: CLICK HERE