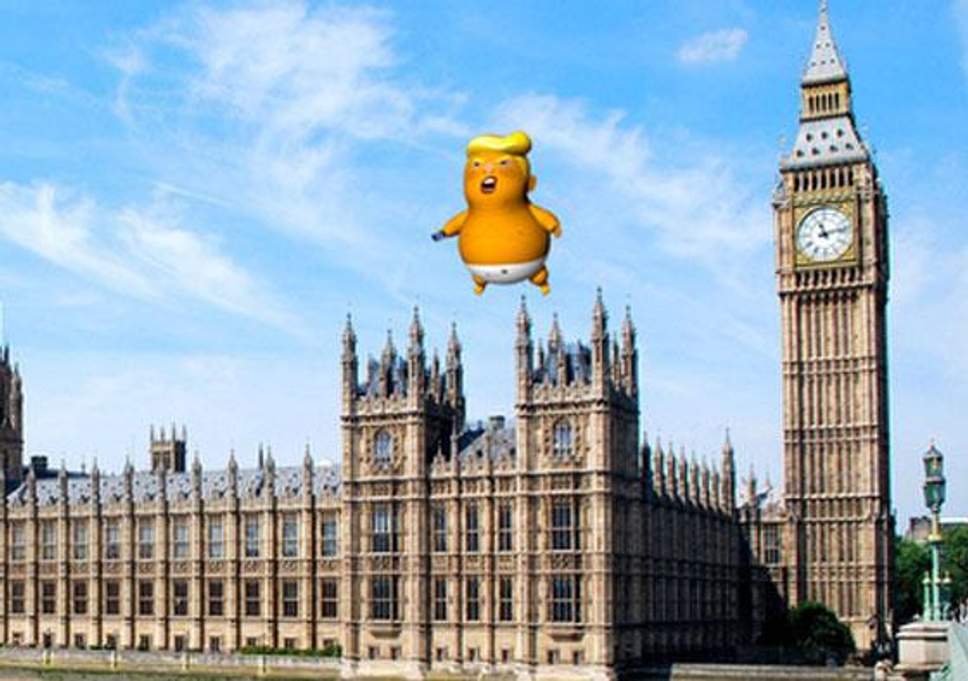 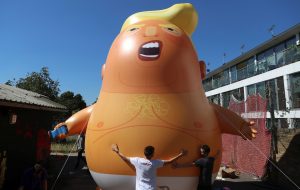 You know, I’m always down for a call into the Nigel Farage Show on LBC, so when one of Youtube’s best “Farage Compilation” video creators, Worth A Look , sent me a link with Farage’s topic for today, I couldn’t pass up trying to get a Resistance Chicks voice in on the issue.

I mean, lets face it, this blimp is hilarious; I don’t care who you are, a giant, almost 20′ tall, orange, Trump baby, in a diaper, flying through the air is down right funny. I laughed out loud when I heard about it and was chuckling for quite a bit when I actually saw it. I dare say Trump himself got a kick out of it. I mean, imagine being a man, making such huge strides, and major changes that effect the entire world that your enemies are angry enough to do something so wild! I’m laughing to myself at just the thought! I’d be telling my friends, “I must be doing something right!”  What really has me in fits is the fact that this is what they have chosen to do to voice their ire. Come on, if you don’t see the humor in this, you’ve had too many sour pickles, this is absolutely fantastic! 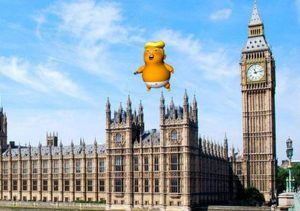 For those unaware, Trump is set to finally visit the UK on a working visit Friday, July 13th. There are plans for him to meet with the Queen, who as Nigel said on the show today, is tickled pink about this since she is quite a fan. President Trump had originally planned a visit to our cousins across the pond last year, but his opponents made such a ruckus about it that it was put off. This visit itself still isn’t an official state visit, but it’s said that will happen next year sometime. 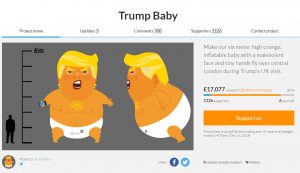 Greater London Authority approved the request for the blimp to be allowed to fly. Thousands signed a petition and a crowdfunding campaign raised more than $20,000 to fly this monstrosity in the sky and ground their  balloon in Parliament Square Garden, near Big Ben and Westminster Palace. You can find them on Twitter under @TrumpBabyUK.

The argument Leah and I posed on the phone with Nigel today is this: If the head of say, Saudi Arabia, were to visit the UK,  and a giant blimp that said, “Bacon is Great!” were to be requested to fly near Big Ben and Westminster, would it be allowed? “Not a Cat’s chance in HELL!” Nigel said when we spoke with him.

In the name of freedom of speech, I’m actually okay with the Blimp being approved to make it’s infantile appearance during the planned “Stop Trump” protest. Rather, it’s the hypocrisy in which the outrage can be found. Right now in the UK we have reporters such as Tommy Robinson being thrown 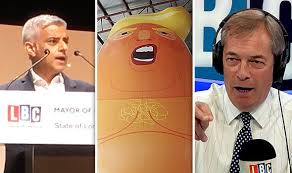 in jail for reporting facts on Muslim rape gangs; we have people being fired, fined and jailed for “hate speech” on social media, and yet, this. A blimp, depicting the leader of the free world, who represents the entire American people, with small hands, as an infant in a diaper and a malevolent face is allowed to fly. Forget the fact that they’re offending more than half of the American people or half of the UK that voted Brexit and also support Trump. Many of whom are embarrassed that this will be the face of the British people that the whole world will see when Trump makes his first presidential visit to the United Kingdom.  I think it’s fair to ask, “what gives?”. Why is it okay to offend one set of people and not another? The last time I checked, not being offended wasn’t among basic human rights…

One thing is for sure, all eyes will be on Trump Friday the 13th and you know what? Like I told Nigel today, the fact that they are stooping to such immaturity shows just how desperate they are, and I think that’s a good thing. In the words of Trump, “we’re winning”; the snowflakes are melting. So grab some popcorn and pull up a chair for a front row view.

Check out the video of our call into Nigel here:

But, if you’re like Leah and I, and you’d rather see Nigel’s facial expressions and reactions… I’ve cued the show up here… Thanks always to @Orion Prime for saving Nigel’s shows for the rest of us to watch!

The Donald Trump baby balloon was a complete failure.
From better camera angles there were very little people there around the balloon. Other fakenews said it was 10s of thousands.
It as not a big blimp, more like a backyard party balloon.
It was so much a failure the next day they had to whisked it to scotland which was even smaller leftist crowds.

It is me, Jörg. That blimp there, and these protestors… Nobody even showed up. A bunch of dumb leftists, that was all.

The balloon means London hates and that is everything Christian, anti-homosexual, people who are tired of the Muslims invading England, people against the murder of babies. England has turned into a fascist state.

i’m not sure a blimp of the president could embarrass the UK any more than the government and half the residents already have. the UK is a total joke now, it’s basically like california, everyone is so dumbed down, which is a large part of why i am leaving it after living here 55 years i have had enough. my own country has been turned into a shithole, as has much of europe, by corrupt politicians. i can only hope someone will have the sense to take a bow and arrow and shoot the fucking blimp down in tatters as soon as it appears, or i hope dozens of khan blims should be illegally flown to humiliate that fucking clown who got control of our Major city and God knows how that happened. I’m fed up of the British attitude of politely standing back and shaking our heads and saying tut tut, it’s time to get in the faces of these fuckers so they know we are serious and mean business. the problem is the country is rotten from the very top down, and i mean the very top, ie. those invaders from Germany who took over buckingham palace instead of a true British King or queen. sorry for the rant i set out to write a simple short message and i always end up so angry i can’t stop myself from overheating, i am so angry at what is going on all over the world and it should be so easy to stop if we all had working brains to see through the BS, thanks for all you do, Geoff. p.s sorry i cant use a real name or email, i never do on the internet now and i’m sure you know why