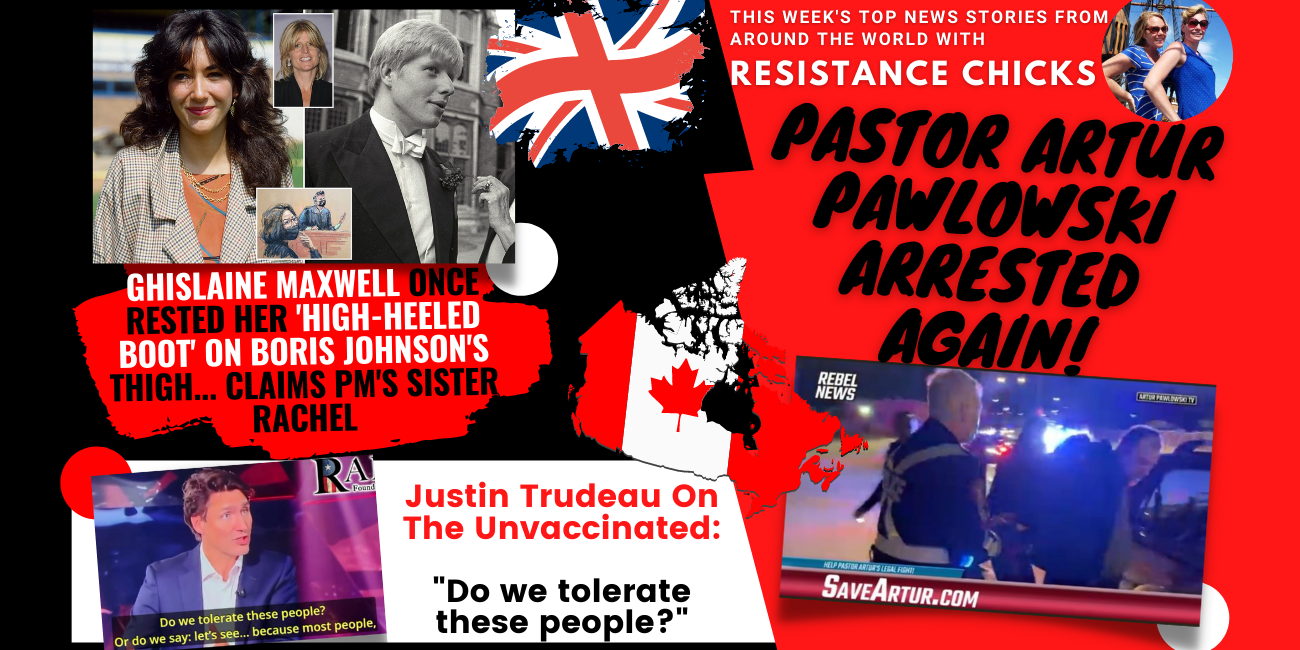 Coming up on today’s TOP News Stories From Around the World:

Polish/Canadian Pastor Artur Pawlowski and his brother arrested again, this time on New Year’s Day after a peaceful protest.

Canadian Prime Minister blackface himself, soy boy Justin Trudeau, abandoned all concerns about convincing those who don’t already agree with him on issues from COVID jabs to feminist ideology, appeared on local TV and speaking in French as if in some code so the rest of the world wouldn’t hear his dystopian threat saying anybody who dares question the wisdom of the mass vaccination policy should automatically be dismissed as a racist or a misogynist. “We are going to end this pandemic by proceeding with the vaccination,” said Trudeau in French. “We all know people who are deciding whether or not they are willing to get vaccinated, and we will do our very best to try to convince them. However, there is still a part of the population (that) is fiercely against it.” “They don’t believe in science/progress and are very often misogynistic and racist. It’s a very small group of people, but that doesn’t shy away from the fact that they take up some space.” “This leads us, as a leader and as a country, to make a choice: Do we tolerate these people? Over 80% of the population of Quebec have done their duty by getting the shot. They are obviously not the issue in this situation.”

Then, according to a Danish radio program a new documentary reveals how Several hundred Danish orphans have been unknowingly used in experiments backed by the CIA. The documentary called “The Search for Myself”. Overall, the studies, beginning in the early 1960s and meant to investigate a link between heredity and environment in the development of schizophrenia, involved 311 Danish children. The examinations took place in a basement at the Municipal Hospital in Copenhagen. Many were adopted or lived in nearby orphanages, Danish Radio reported. Filmmaker Per Wennick, who participated in these experiments as a child, recalls being placed in a chair, getting electrodes put on his arms, legs, and chest around the heart and having to listen to loud, shrill noises. The test was meant to reveal whether a child had psychopathic traits.

Next, Rachel Johnson, sister of Prime Minister Boris Johnson, trended on Twitter after an article she wrote sympathizing with Ghislaine Maxwell in November resurfaced. Writing in British political magazine The Spectator, the Prime Minister’s sister Rachel Johnson wrote a positive piece about her relationship with Ghislaine Maxwell on the 17th of November, shortly before Maxwell’s trial begun. In a piece titled ‘It’s hard not to pity Ghislaine Maxwell’ which did not actually mention Maxwell until the final paragraph — with Johnson’s initial focus instead being her pet dogs, her mother’s death, and her podcast — she described an intimate encounter between the now-convicted child sex trafficker and her brother.

Canadians in Quebec were ordered into another hard lockdown with pet owners initially being told they couldn’t even walk their dogs after “curfew.” Around the world New Years celebrations and fireworks commenced to usher in 2022 even when those celebrations were banned. Several hospitals around the world including some in Canada and Australia are seeing cuts to services or burnt out healthcare workers told to come into work even with a positive test or close contact if they don’t have symptoms. Seems like there is a shortage or something.

Finally, the latest clip from our favorite commentator in the UK: Neil Oliver “From the ESTABLISHMENT’s point of view, it seems nothing has changed in 2022”. All of that and MUCH more, ahead!