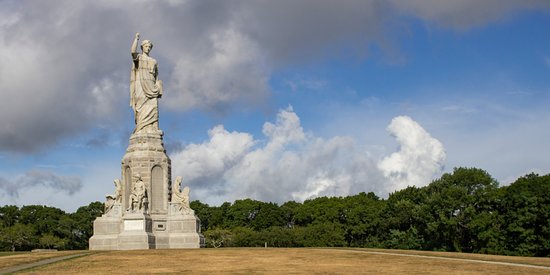 If you don’t follow us regularly, you might not be familiar the big trip we, at Resistance Chicks/God’s Little Acre, plan to take to Plymouth next June/July, 2020… but it’s been on our schedule for 6 years, ever since we went to visit Plymouth after watching Kirk Cameron’s film Monumental. After meeting our friends Leo and Nancy Martin of the John Jenney Museum and Historic Tours we knew we’d be back 7 years later for one of the most significant anniversary celebrations our nation has seen! You may not know, but 2020 is the 400 year anniversary of the Pilgrims landing on these great shores. The town of Plymouth will be celebrating all year long, as will we, but our friends at the Plymouth Rock Foundation are putting on a big, historical, 5 day event, that has me wanting to grab strangers off the streets and load them in our van to go! They are referring to it as the “American Pilgrimage 2020”, calling all Americans back to our roots, to our “hometown”, in order to commemorate this landmark celebration, together, as an American family. Wouldn’t it be something if our beloved President saw fit to join the American family and pay tribute to our forefathers during one of his stops on his campaign trail leading to November?

Our own family has been feeling the power of God surrounding Plymouth 2020 for quite some time, but yesterday, when we finally booked our rental, spiritually it was as if something was set motion. I felt it so powerfully that I sent the following message to my best friends, but then decided I wanted to share it with all of you TOO!

“I took this photo on our first trip to Plymouth in 2013, I’ve made it my home screen on my phone because it reminds me of the joy I’m to hold on to. The excitement I have about our pilgrimage to Plymouth next year, feels like the excitement you’d have getting married or planning some other big event. But I have to be honest, it’s not really about the trip and I wanted to make that clear so that for those of you who aren’t able to make it, you can still share in this joy!…”

“… Something huge hit me last night. The more I listen about our founding fathers through David Barton and others, delving through original documents, the more I am convinced that they, along with the Pilgrims, were quite literally among the most anointed men and women to walk the earth since the disciples. Why is that important? Because just like Abraham, Isaac and Jacob, or even David, God honors their righteousness, down through generations (generations who, themselves, are not worthy of it because they have rebelled). He remembers His promise to them and their obedience, their sacrifice. Which means that America really and truly belongs to God and we WILL see her turning back to the old ways.”

“We will see her as a figurehead, before the world, of morality and goodness. Alexis de Tocqueville, a French diplomat who came to America in the 1830’s summed up his findings on our Nation saying: ‘America is great because she is good. If America ceases to be good, America will cease to be great.’ He traveled our nation to find out what the key was, and he found it. That is my country; my country is good. We don’t quite understand just who our pilgrim and founding fathers were, or their amazing resolve to trust God, in spite of the worst possible odds ever, what they gave up, how devoted they were to founding a Godly nation, a Christian nation… in perpetuity!”

“I often hear ‘End times’ people refer to America today as Babylon, thinking it’s going to be destroyed. America is not Babylon, God built America; the very foundation of America is birthed by the very “finger of God” (our founders used that quote specifically quoting from the Old Testament). God is not going to destroy what is His, He REDEEMS it! If anything, America is similar to the New Jerusalem. So, what does this mean? It means that I believe that we are living in a time of witnessing God restore America to her former state. Something will be destroyed though: evil and it’s century long hold on our nation. It’s incredibly exciting.”

“We all know that 2020 means a clarity of vision, and I believe in 2020 we’re all going to see America coming back to a knowledge of our foundation- where we came from. A foundation of loving God, of honoring Him; we will see a nation returning to faith, family and farming, recognizing the value of community, much as the Amish do. A Nation where, as hundreds of years ago, every person knew of God, knew the Bible and reverenced Him and His people; where purity was the norm and immorality was frowned upon. I’m going to see this in my lifetime and it’s happening even now! So that’s what Plymouth 2020 means to me and why I’m so giddy. This is good news!”

Not every American can attend this event and Plymouth will be celebrating all year long, but regardless of your being able to make a pilgrimage to America’s Hometown in 2020, allow this to fan the flame inside of you to celebrate along with us, wherever you are! For those of you interested in attending, please visit the Plymouth Rock Foundation for more details!