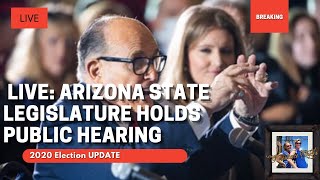 Today’s hearing in Arizona was very long… Yes we streamed the entire 9+ hours on multiple platforms for our Resistance Chicks viewers, and I stayed with them the whole time. I literally put in a 12-hour day on this. I will not go over all of the evidence in this post, or in the comments. But I will say two things: 1) If anyone tries to tell you that there is no evidence, or not enough evidence, you tell them that they must watch all nine hours before they speak to you again. The evidence is overwhelming, it is huge, it is treasonous, and from just what we heard today, we’re barely scratching the surface.2) The people that spoke, and the representatives who were listening to the testimony, were all highly credentialed people. Many had doctorates, we heard from colonels, and others with high ranking military backgrounds, MIT graduates, we heard from university professors, you name it… But what struck me even more than all that, was at the end when the representatives and state senators spoke… All of them invoked God, the word of God, our founding fathers, the declaration of Independence, the Constitution, the Bill of Rights, and spoke to the fact that this is a spiritual battle, that requires spiritual armor (Yes one representative even told us that we needed to be putting on the armor of God) and that this is a battle that will be won through the power of God. And he will use the righteous men and women who are fighting for this. I have never seen a move of God, especially in our government officials, like this in my entire life. The side that is invoking scripture in public hearings, and on social media, who sees this as a spiritual battle, who is on their knees every night praying to God that Justice will win: simply cannot lose. That’s a fact, and you can take that to the bank.